Even if the resulting disk image and firmware update files are relatively small (202 MB and 55MB, respectively), the size of the corresponding sources and the compilation by-products tend to be rather large, such that an available disk space of at least 12GB is required during the build.

And even if the resulting FunKey-OS boots in less than 5s, it still requires a considerable amount of time to compile: please account for 1 ½ hour on a modern multi-core CPU with SSD drives and a decent Internet bandwidth.

The FunKey-OS is meant to be built on a native Ubuntu or Debian Linux host machine (Ubuntu 20.04 LTS in our case, but this should also work with other versions, too). And with only a few changes to the prerequisites, it can certainly be adapted to build on other common Linux distros.

However, if your development machine does not match this setup, there are still several available solutions:

In order to install one of these virtualized environments on your machine, please refer to the corresponding documentation.

While Buildroot itself will build most host packages it needs for the compilation, some standard Linux utilities are expected to be already installed on the host system. If not already present, you will need to install the following packages beforehand:

On Ubuntu/Debian Linux, this is achieved by running the following command:

Build in a Docker Container¶

When using a Docker container, all the prerequisites are automatically installed.

Build on Windows 10 with WSL2¶

First, make sure your version of Windows 10 is new enough. Press Win + R to open the Run window and type in winver to check your Windows version and build number. The version should be 1903 or higher, the build number 18362 or higher. 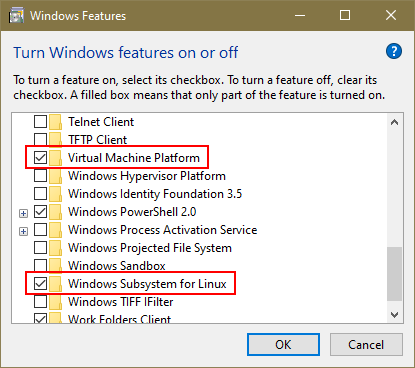 Some addition Windows features need to be enabled. Open the Windows Features window either by searching for "Windows Features" in the Start Menu, or by opening Settings -> Apps & features -> Optional features -> More Windows features. There ensure that both Virtual Machine Platform and Windows Subsystem for Linux are enabled. After pressing OK to confirm, Windows will ask you to reboot your computer to complete installation.

An additional update is required to run WSL2. Download and install the following package from Microsoft:

You can run the following command in PowerShell to make WSL2 the default version. New installations of Linux distributions on Windows will then automatically use WSL2. Otherwise they will use WSL version 1 by default.

Now that WSL2 is ready to be used you can download a Linux distribution from the Microsoft Store. For this guide, it is recommended to install Ubuntu 20.04 LTS. After installing, Ubuntu can be started by either selecting it from the Start Menu or typing ubuntu2004 on the command prompt. The first time you run Ubuntu you will be asked to create a new user account with a username and password. These do not have to be the same as your Windows account.

If you've enabled WSL2 as the default version in the previous step, Ubuntu will be automatically configured to use that version. If you haven't set WSL2 as default, or if you've installed Ubuntu before setting WSL2 as default, it's possible to manually change the version for this distro. First, open a PowerShell window and type the following command to list all installed Linux distributions:

Check the name of the distribution you want to upgrade and run:

With <versionNumber> set to 2 to use WSL2. You can use the same command with version number 1 to return to WSL 1.

WSL2 is now ready to be used¶

Your Ubuntu installation is now ready to be used. Starting Ubuntu from the Start Menu will open a terminal with a Bash prompt. Everything you type here will be executed in Ubuntu. You can run and install applications within Ubuntu as you would on a complete installation or virtual machine.

Follow the instructions in the Build on a Physical/Virtual Machine section to install the requirements needed to build FunKey-OS.