This page will guide you through building a very simple application for FunKey using the SDK.

FunKey is an embedded Linux device with an ARM processor at its core. Programs made for other computers will not work on FunKey, and developing programs on the FunKey itself is rather impractical. Instead, development for embedded devices like FunKey almost always uses a method known as cross compilation: building software on one platform (such as a desktop computer) to be used on another (like FunKey).

The FunKey-SDK contains a cross-compilation environment based on GCC, including the compiler toolchain and the libraries available on the FunKey.

Before we can begin, setup a Linux-based compilation environment as shown on this page.

The FunKey-SDK is included in releases of the FunKey-OS, starting from version 2.0.0, and can be found on GitHub. Alternatively, you can compile the SDK yourself.

Unpack the SDK's .tar.gz file somewhere on your build system. Before you can use the SDK you must first run the relocate-sdk.sh script. This will update all references paths in the SDK to its current location. If you decide to move the SDK to another directory at a later point, don't forget to re-run the script.

The SDK is now ready to use. For additional convenience it is highly recommended to source the environment-setup of the SDK. This will add the SDK utilities to the PATH, setup standard variables such as CC and LD to refer to the SDK versions of the toolchain, setup standard options for CFLAGS, and create aliases for configure and cmake to work with the SDK.

Let's build a simple application to test that everything is working. Below is a small C program that will use SDL to display a green square for 5 seconds, and then exits.

Save this file as hello.c somewhere outside of the SDK directory. If you've sourced the environment-setup you can use the variable CC to refer to the C compiler in the SDK. Let's build our program as hello:

The hello program you've just created is a valid executable for FunKey, but in order for the launcher to find it we must first bundle the program in an OPK package. Create a new folder for the contents of the package and put into it:

This file describes your program to the launcher:

Once you've got everything ready you can turn the folder into a package using the OpenPackage Creator. Select your folder with the Open button, or drag it over the window. The OpenPackage Creator will note that you've already created .desktop file. Choose the "Use existing as is" option. Finally, click the Pack button to create hello.opk, ready to be transferred to the FunKey. 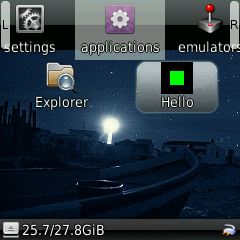 Your application is now installed on FunKey. Note that only the GMENU2X launcher can open custom applications. So switch to that launcher via the FunKey menu if you haven't already. You should find an application called Hello under the applications category in the launcher. 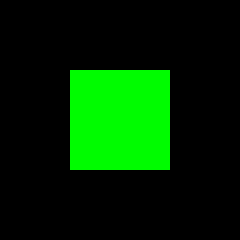