Like most SoCs, the Allwinner V3s provides a serial console as a control terminal for debug and/or normal operation. By default, it is mapped to UART0, and it is used by the BROM (Boot Rom), the U-Boot bootloader and by the Linux kernel to output messages during the boot process, and later by the Linux kernel to log messages during normal operation. Depending on the configuration, it can be used too for loging into the system over an UART.

The Console schematic only requires a minimum of external components: 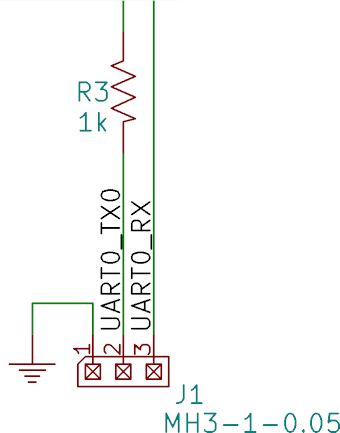 Besides the 3-pin 1.27 mm (0.05") pitch header J1 that will not be mounted on standard products, there is only a single series resistor R3.

What is the purpose of this resistor?

There is no ESD protection TVS diodes on the UART: this interface is not supposed to be mounted in the final user device, and PCB space is really constrained in this area, so they are omitted.